Most of my DIY projects are a two person job as they often involve power tools. I’m not allowed (according to the Beard) to use most power tools unless there is “adult” supervision. Something about me being legally blind and clumsy…

However, this DIY I did all by myself and I am pretty chuffed with how it turned out. I am embarrassed to tell you that I once paid $125 for a tree stump side table very much like the one I just made.

I guess that is just another benefit of living in the country. There are countless people clearing trees, for various reasons, on their property and are only too willing to give away what they don’t want. Yes you heard me! They were giving them away! Free!

The only help I needed was getting the trailer down to the site and back home. The actual “picking” of the stumps was a lot of work traipsing through the woods, over a single plank “bridge” and pulling, pushing, rolling and carrying my 7 stumps back to the car.

Once I got the stumps home I set them out around my fire pit as extra seating or side table. After a few months I realized I had more than enough that I could use one or two as tables in the house. Now I don’t have a kiln to dry out the stumps so it sat in the basement for 5 months until it was completely dried out. In hindsight I should have taken one in during the summer when it was DRY and not in the Fall when it was thoroughly damp.

When the stump finally dried out I stripped it of its bark and then sanded the entire thing. I started with a coarse grit sandpaper and gradually worked down to a finer grit for a smooth finish. Next I used Linseed oil on the entire stump and let dry. Personally I like the look of Linseed oil, but you could use a wood conditioner of any other stain that suits you.

I was happy with the way it looked, but decided to paint the top surface white for a little contrast and fun. Now it was finished and ready to put to use. I have to say that it was one of the easier DIY projects that I’ve done but it certainly wasn’t the quickest, what with all that waiting for it to dry. This project also cost very little. Actually, you could say it was free because I used left-over paint and linseed oil from other projects around the house.

Now it sits in our Guest Room where it goes great with the “rustic cabin” vibe that’s going on in there. 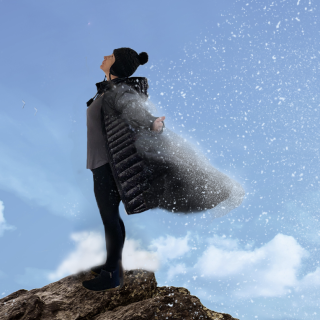